The first European to explore Michigan, Etienne Brule, came in about 1620. Michigan was part of New France or Canada from 1668 to 1763. In 1701, the French officer Antoine de la Mothe Cadillac, along with fifty-one additional French-Canadians, founded a settlement called Fort Pontchartrain du Detroit, now the city of Detroit. When New France was defeated in the French and Indian War, it ceded the region to Great Britain in 1763. After the British defeat in the American Revolutionary War, the Treaty of Paris (1783) expanded the United States’ boundaries to include nearly all land east of the Mississippi River and south of Canada. Michigan was then part of the “Old Northwest”. From 1787 to 1800, it was part of the Northwest Territory. In 1800, the Indiana Territory was created, and most of the current state Michigan lay within it, with only the easternmost parts of the state remaining in the Northwest Territory. In 1802, when Ohio became a state, the whole of Michigan was attached to the Territory of Indiana, and so remained until 1805, when the Territory was established.

The Michigan Military Heritage Museum features one of the original British Cannons from Fort Detroit. The cannon was has been restored and is on display along with some Native American artifacts from the region.

The picture below is of the Ojibwe tribesmen playing a rowdy ball and stick game similar to lacrosse and suddenly rushed the open gates of Fort Michilimackinac and massacring the small garrison and English inhabitants. It was the westernmost attack in a continent-spanning uprising against English rule led Pontiac in 1763. 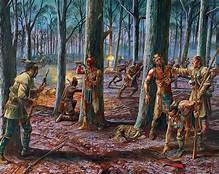 Your ticket for the: Colonial Michigan